Jenks Alumni Joe Cappa’s animated short film, “Ghost Dogs,” is a specially selected film that will be screening at the 2021 Sundance Film Festival on Saturday, January 30th. Cappa graduated from the class of 2003 at Jenks High School and was the senior class president. After working for a couple of advertising agencies in Oklahoma, he moved to Denver eight years ago to focus on his own work and is now an animator at Cappa Productions. The rescue pup, the main protagonist of “Ghost Dogs,” looks around the house. Courtesy of Sundance Institute

“‘Ghost Dogs,’ is a short animated film about a rescue pup that’s being haunted by the deceased pets of the family and has an 80s or 90s texture and feel to it,” says Cappa.

“It’s creepy. It’s funny. It’s a little psychedelic. It feels a little nostalgic,” says Cappa. “There used to be a cartoon block on MTV back in the day that I used to watch as a kid on late night television. It was kind of adult content. I didn’t want my parents to know, but it was called, ‘Liquid Television,’ and that’s the look I wanted to give it.”

The Sundance Film Festival has become one of the most notable and prestigious film festivals in the world since it began 36 years ago. This year’s festival began yesterday, on January 28, and goes till February 3, 2021. For the first time, instead of convening in Park City, Utah, the festival is collaborating with select independent theaters in 24 states across the country to offer screenings closer to home. In Tulsa, Circle Cinema has partnered with the Admiral Twin Drive-In to host the Sundance films. “Ghost Dogs” will screen in Tulsa on January 30 at the Circle Cinema and the Admiral Twin. While the Circle Cinema is already sold out, the Admiral Twin still has tickets for a 7pm Double Feature of “Ghost Dogs” and the feature film “Mass,” by Fran Kranz.

According to Clifton Raphael, the film and screenwriting instructor at Jenks, Sundance is committed to helping filmmakers who are starting out. The festival also gives smaller-budget works by established actors and directors the exposure they need to attract opportunities for widespread distribution.

“It is exciting for the 2021 Sundance Film Festival to come to Tulsa,” says Circle Cinema Programmer Chuck Foxen. “This is America’s largest independent film festival. It’s a big deal for Circle Cinema and for Tulsa. I have attended the Festival in Utah for the last 10 years, and most of the major films that play at Circle Cinema are first seen at the Festival. This will be an opportunity for Oklahoma to see award-winning movies before anyone else, with added enrichment of filmmaker Q&As, panel discussions, and more.”

Cappa is grateful for the fact that Sundance has worked to keep in touch during the pandemic.

“Sundance has done an amazing job taking care of their directors because they know what a let down it was that we couldn’t go to Park City to partake in the physical festival. Doing video on demand means my short film is going out to a larger audience,” says Cappa. “More eyes will be able to see ‘Ghost Dogs.’ I get emails from them every day, asking if I want to be part of this meet and greet or get involved with producers or investors. They’ve been awesome.”

Cappa’s inspiration for the film came from his own recurring dreams about being trapped in a haunted house. He wants to share that experience with viewers.

The dogs started out as work he created for an art show about ten years ago.

“I had not done art in a very very long time. I was just doing video stuff. I started watercoloring these dog characters with human legs and arms so I put them in the house and made them the antagonists, ghost dogs. That’s pretty much the idea,” says Cappa.

The idea for creating an animated movie about these dogs came out of a chance meeting between Cappa and a friend who is now his production partner, J. W. Hallford.

“I kind of knew J.W. from Jenks. I was friends with his brother,” says Cappa. We ran into each other in Boulder, CO talked about what we were both doing in our lives J.W. said he would love to help me animate something, finance it if I needed money. And that’s when I really started thinking about making ‘Ghost Dogs.’ He was in Nashville and I was in Denver, but he’s been involved the whole time for two years.”

“J.W. and I didn’t even know it at the time until the Torch reached out, but my brother Dave Cappa and went to Jenks and he colored in all of the drawings and then Nicholos Paus who did the music is also a graduate of Jenks and Sean Dugan, who sang the jingle in the movie is also from Jenks. So it was all Jenks people except for one person [Patrick Carroll].”

Cappa finished his work on “Ghost Dogs” in August and submitted it to Fantastic Fest, the largest genre film festival in the world. He was thrilled that the piece was accepted and made its premiere there. 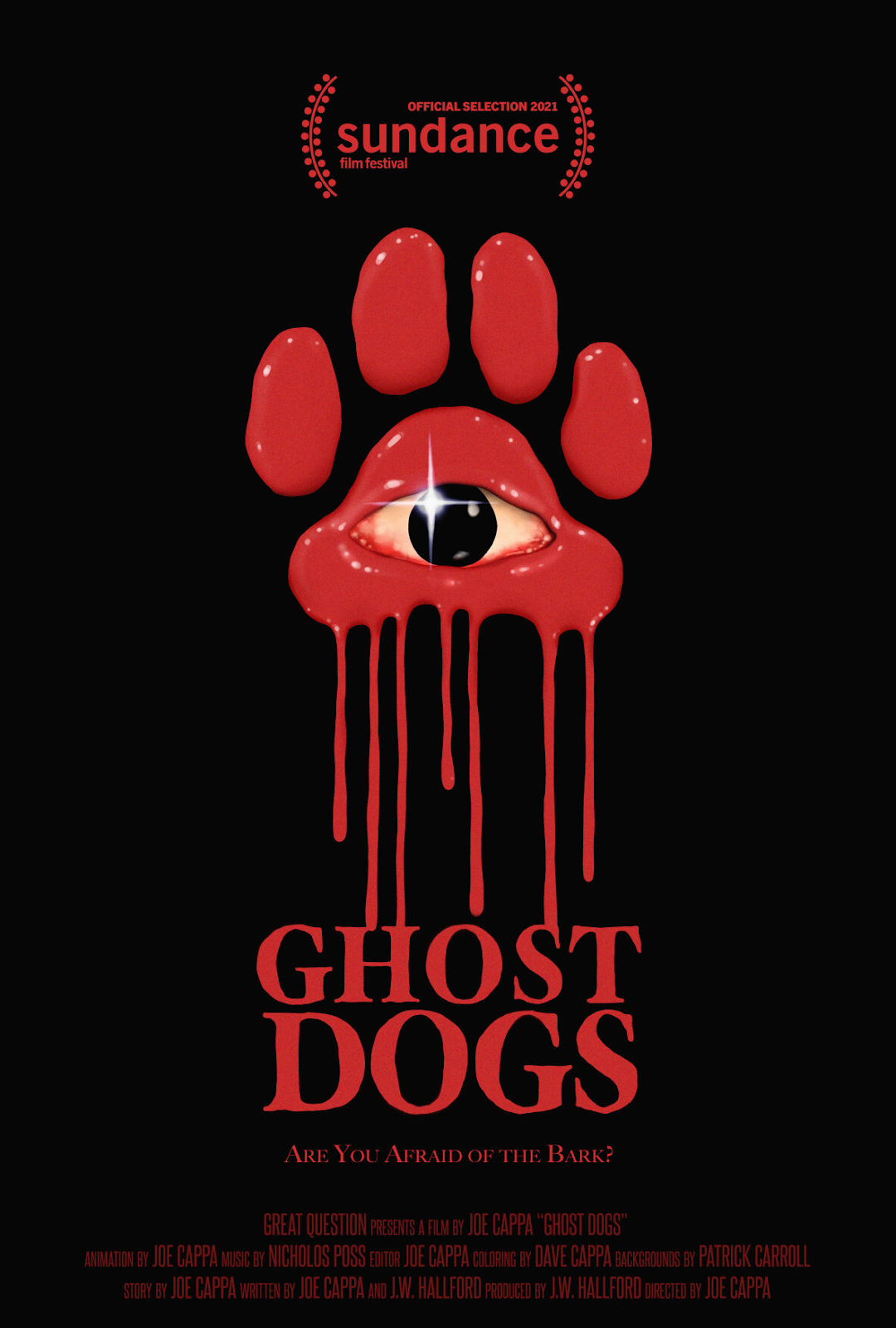 “We [J.W. and I] were thinking we were hot sh*t! We thought, Everybody loves “Ghost Dogs.” And then we didn’t get into two other film festivals we submitted to, so then we were thinking, oh maybe “Ghost Dogs” isn’t good at all. Then Sundance reached out about mid November. It was pretty unreal,” says Cappa.

“[When] we learned that Tulsa was going to be one of the screens, we got really excited. My parents live in Tulsa. All my good friends. I have so many memories at Admiral Twin, it’s gonna be really cool and a surreal moment to watch my movie up there with all my friends and family,” says Cappa. “Tulsa’s just been great. I mean, everyone has been trying to promote this movie as much as they can. I make beer labels at a brewery in Tulsa called American Solera, and they even crafted a “Ghost Dogs” IPA to celebrate the occasion. Circle Cinema has been awesome too. They’re really helping us out.” 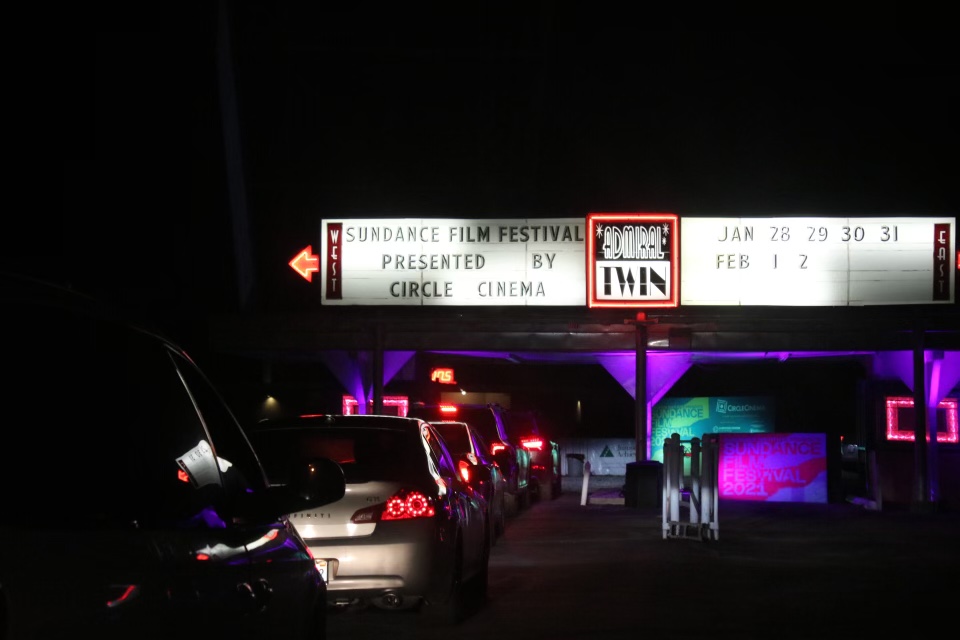 Cars drive into the Admiral Twin on the first day of the 2021 Sundance Film Festival in Tulsa, OK. Courtesy of Audrey McGee.

Cappa’s interest in filmmaking stretches back into his childhood.

“When I saw Jurassic Park, I was a little kid who loved dinosaurs. I, [thought] man, I would love to make this stuff,” says Cappa.

Jenks had a video program called “High Jenks” that was discontinued Cappa’s senior year, the year he would have been eligible to enroll in it. He continued making his own videos and went on to earn a Bachelor of Fine Arts in Film and Video from OU.

“After college, I moved back in with my parents and was just applying to local news, just anything that would hire a videographer. Nothing came of that and then I ended up working at Fine Airport Parking. I was parking cars and stuff. I did that for about six months before I got an interview at Ackerman McQueen and that was my first job in an Ad Agency and then I’ve been in the ad world until I moved out to Denver,” says Cappa. I mean as far as stuff in my career, I’ve made music videos. I’ve made some posters for Weird Al. Labels for my friend’s brewery. I’ve done stupid commercials. I feel like I’ve done a lot of different random video projects, but I always just try to direct myself towards making art so typically music videos. And I’d charge very very cheap prices just so that I could keep building up that resume.”

Being invited to show his work at Sundance feels like a validation of the unique path Cappa has taken, as well as the friends and family who have encouraged and supported him all along the way.

“I hear this is a game changer for directors and I’m just hoping that my film gets out to the right people who align with what I’m trying to do and make more cartoons, more stories, and make my own stuff. That would be amazing,” says Cappa.

“I’d love to make more animations. I thought I’d be burned out by now, but I love it. Animation allows me to tell stories at any scale,” says Cappa. When you can animate, the budget really doesn’t matter cause you can just draw. It frees you up to do any idea. I’m just excited to tell more. [stories]. I have so many to tell.”

Cappa has some solid advice for those with artistic hopes and dreams:

Cappa’s talent spans a wide variety of media ranging from video to art prints. To find more creations by Joe Cappa, click on the link to his website: https://www.joecappa.com/

For more information about “Ghost Dogs,” here is the link to the website: https://ghostdogs.net/